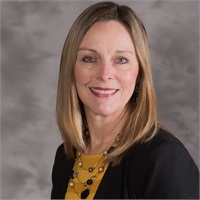 Marianne Bouras received her degree in Business Management from Concordia University in Wisconsin. She became a key member of The Chamberlin Group in 2008.

Formerly a loan officer for CitiGroup, she brings 30 years of industry experience to her position.

Marianne is key to the success of our company. As Director of Operations for the Chamberlin Group, she manages the financials and back-office strategies. She is in charge of 1035 Exchange/Direct Custodial Transfer Requests and processes all new client transfer requests. Client satisfaction is a priority for her. In 2009, Marianne was recognized as the top administrator out of more than 200 offices nationwide.

Marianne has been married to Jim Bouras for 25 years and they have four grown children and two granddaughters. Now that they have an empty nest, they are enjoying taking trips and hiking. They are members of St. John’s Lutheran Church in Ellisville. Marianne is an avid bicyclist and rides about 1,000 miles each year.